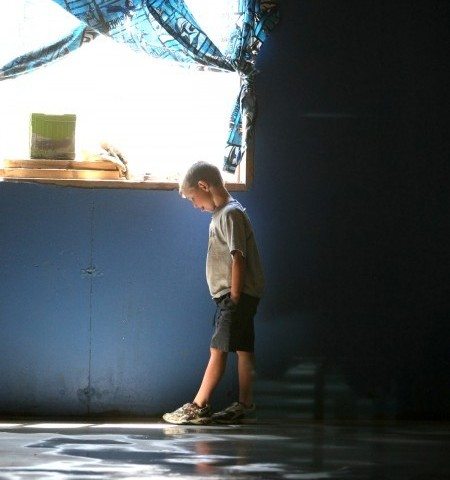 About 30 minutes was all it took on June 16 to throw the Christensen family into a squall that threatened to leave them homeless.

On Saturday, it took a crew of 20 volunteers about four hours to help them take a big step toward ensuring that doesn’t happen.

A short, violent storm blew through town Wednesday and dropped nearly an inch of rain and large hail on the area. As a result of the storm and what they say was faulty work by a contractor, the basement of the Christensen’s home, on Vista View Circle in Blue Creek, flooded with hundreds of gallons of mud and water.

“It was like a big old volcano effect and it was shooting water and mud out of a pipe,” Robin Christensen said.

Saturday morning, about 20 people pitched in to clean out the basement and much of the damage in an effort organized by Nick Lambert, owner and operator of Billings-based Faithful Cleaning Company, which provides water damage restoration services.

The concern was that the water and mud would begin to mold, making the home unlivable. The Christensens — parents Robin and Jai and kids Trey, 8; Marcus, 6; and Leeland, 3 — contacted Lambert after the storm about repairing the basement.

However, the Christensens’ insurance company probably won’t cover the damage because it said the problem was a contractor’s fault.

The family believes the flooding happened because a contractor who worked on the house — which the Christensens moved into last August — didn’t properly compact the ground around a pipe leading from the home’s cistern. A pipe leading into the home’s basement wasn’t sealed, Robin Christensen said, and allowed the water and mud to flow in.

“I started to leave after talking to them and thought, ‘You know, there is something I can do,’” Lambert said. “I saw a family that was in need and they obviously didn’t have the funds to hire me or anybody else, even at a discounted rate.”

He asked the Christensens if he could organize a volunteer cleanup for Saturday and, after getting their blessing, started getting the word out. With a crew of about 20 people, they removed at least 100 5-gallon buckets of mud — 13 inches deep in some places — from the basement along with several hundred gallons of water using only shovels, buckets and manpower.

“We had a big, huge assembly line,” she said.

They also had to haul out, and throw away, most of the personal belongings in the basement, including the kids’ beds, toy boxes, bookcases and furniture — all of which was loaded into the back of a large truck Saturday to take to the county landfill.

Lambert estimated the cleanup efforts would have taken two or three weeks had he been hired for it, and without the volunteers, and would have cost between $15,000 and $18,000.

Robin Christensen said it couldn’t have happened without Saturday’s volunteers. While the unfinished basement now sits empty, the family hopes to be able to start replacing the basics — mainly the boys’ beds and bedrooms — within the next few weeks.

“We went from having a family that essentially thought it could be homeless soon to being able to have their house and being able to live there again,” Lambert said.

Read more on The Billings Gazette